“This Is Now The New Normal”

January 20, 2010 Rachael Benson 7 comments
This devotional is written in loving memory of my father, Rex Benson, who passed away on January 27, 1995. This year marks 15 years since his death.  He’s the man who said, “This is now the new  normal” when I was born.  This is one of the last pictures I have of him before he died.  We’re packing up to go home from our ski trip at Lake Powell in Utah.  That’s me on his shoulders at 11 years old.  What a great time we had! This Thursday marks sixteen years since his death.  What a loving father he was! Dad, thanks for treating me like a normal kid! I love you and  I miss you! 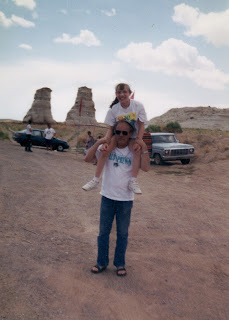 I was born on February 8, 1983.  My mother couldn’t bring me home right away because of complications at birth. Originally, I was supposed to arrive on April 8, but due to lack of oxygen supply to the brain, doctors had to get me out quickly. I was two months earlier than expected.  No one thought I would live.
My mother often tells me that my father was the one who set the tone for how the family would handle my disability forever. The minute my mom and dad got a positive report from the doctors that I would live, they also told my parents that I would have to see lots of specialists so that they could closely monitor my condition—whatever it was.  I wasn’t diagnosed with Cerebral Palsy until I was three months old.  Shortly after I was born, my father said, “This is now the normal.”
He meant that it was going to be normal for our family to go to 10 different doctors, I would go to physical and occupational therapy on a weekly basis, that was the way our life was going to be.  That was okay.  His strong leadership is a huge part of what shaped my character today. Thanks Dad.
Faith Lived Dangerously