“It’s a beautiful day in the neighborhood ….” The Ministry of Mister Rogers 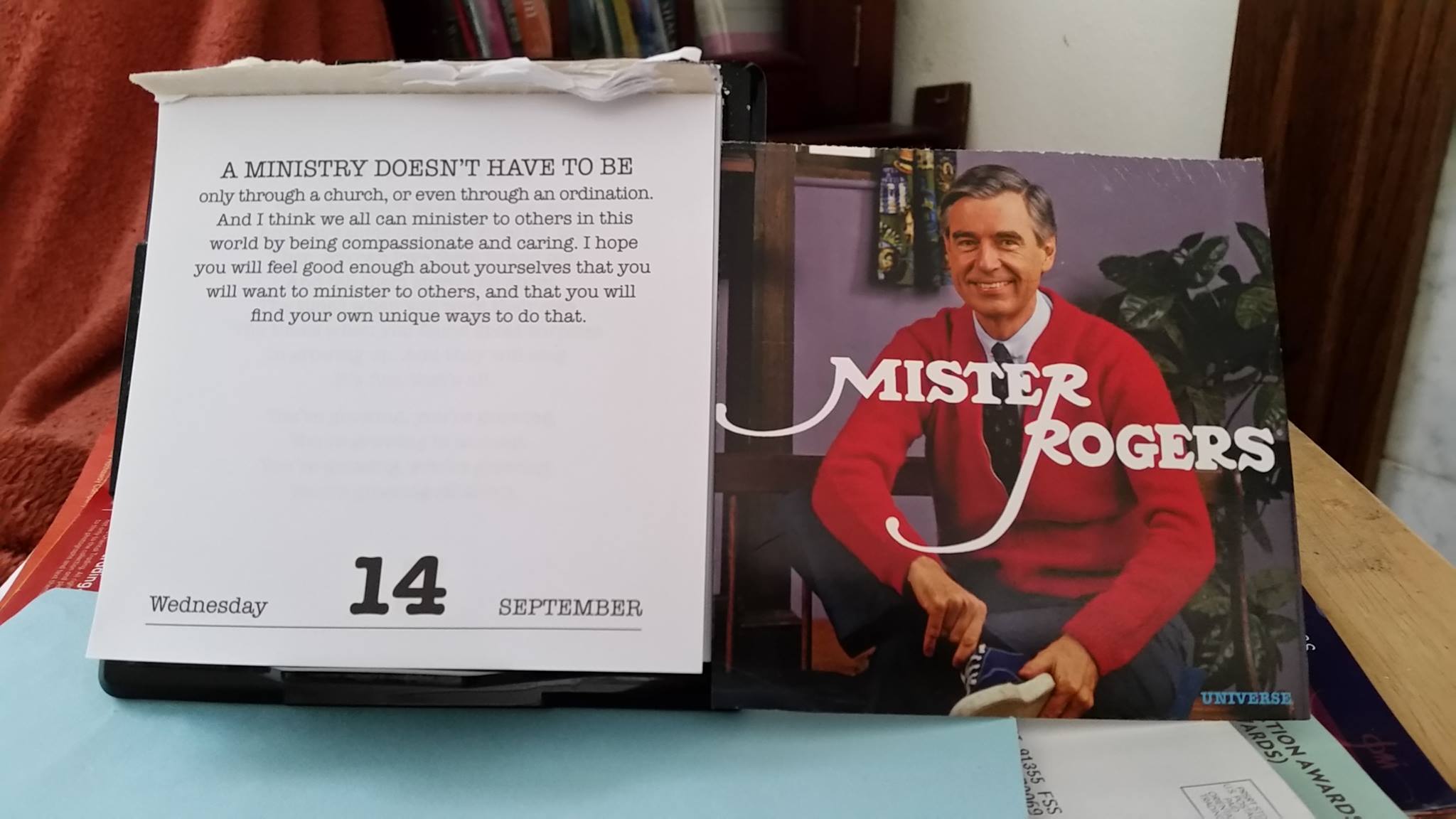 Sound familiar? Those are the beginning lines to the opening of the Mister Rogers’ Neighborhood theme song. Every time I hear the first few bars I can picture Mister Rogers’ house. The traffic lights, the fish, the curtains, the trolley, Etc. Through the years Mister Rogers Neighborhood stayed the same. In a fast paced world trying to keep up with the times to please each generation, the format never changed. Many people don’t know it, but Mister Rogers actually went to school to become an ordained minister. Mister Rogers decided to break into television because he saw something he didn’t like. He saw a program at his mom and dad’s place where people were throwing pies at each other and decided to do something about it. When his parents said, “You’ve never even seen television. How can you say that?”

Mister Rogers replied, “Well, I’ve seen enough to know I’d like to try to put my hand in it.” In an interview with CNN, he stated, “I went into television because I hated it so, and I thought there was some way of using this fabulous instrument to be of nurture to those who would watch and listen.”

He earned his divinity degree in 1962, and at his ordination the Presbyterian Church asked him to serve children and families through television. Mister Rogers Neighborhood began on February 19, 1968. I know what you’re thinking. “Mister Rogers a minister?  I never heard him mention God or Bible verses in the show.”

That’s true but the Christian principles were there. Mister Rogers believed in the famous saying, “Preach the Gospel at all times and when necessary use words.” He always greeted viewers by saying, “Hello Neighbor.” He believed your neighbor was whoever you happened to be with at the moment. The show was at a very slow pace. Mister Rogers was the host and did many of the characters’ voices in the Neighborhood of Make-Believe. He played himself not a made-up character. His ideas were easy to follow. All the episodes for the week were based on one theme such as music, fast and slow, etc. He also introduced viewers to people like Eric Hill, author and illustrator of the Spot books.

Whenever he showed how various things were made like crayons on his projector called picture picture, he never sped up the process. Viewers saw each step as it was happening and he explained it. One of the key songs in the program was:“I like to take my time I mean that when I want to do a thing I like to take my time and do it right. I mean I just might make mistakes if I should have to hurry up and so I like to take my time.” One of my favorite episodes was when he took viewers to a local pretzel factory and showed people how pretzels were made. I love pretzels.

On the factory tour, the man who was making pretzels said they originated in Germany, France, and Italy, 1500 years ago and were given to children for saying their prayers. A pretzel has three folds. The first fold represents children crossing their arms praying to God. The second represents parents. The three holes resemble the Holy Trinity. God the Father, God the Son, and God the Holy Spirit. It’s the only time I remember hearing any reference to God in the show.

He interviewed all kinds of people, including people with disabilities who were in wheelchairs, on crutches, and blind. He made being different okay and always told people they were special. When Mister Rogers said, “You Are Special,” and “It’s you I like,” I knew he was talking to me. It was okay for people to cry and talk about what they were feeling. One time I remember him saying, “Real brave and strong people are able to cry when things are hard. The one thing they don’t do is give up.”

Even when the characters in the Neighborhood of Make-Believe got into a conflict with one another, they always worked through it. They talked it out and resolved the conflict. They said, “I’m sorry.” Whenever they did something like build a school, everyone worked together. People learned how to cooperate with one another and share ideas. My mom never minded me watching Mister Rogers even as I got older because she could be in the kitchen and listen and not have to worry about what I was watching. We both recognized the great quality of the program.

In an interview he said, “I’m so convinced that the space between the television set and the viewer is holy ground.” Because he hardly mentioned God or Bible verses in the show, he was able to touch many lives just by being himself. As he would say at the end of every show, “You make each day a special day. You know how, by just your being you. There’s only one person in the whole world like you and people can like you exactly as you are.”

I learned it’s okay to be slow. The best things made are made slowly. Trying to move too quickly causes problems. It’s okay to cry. Just don’t give up, If there’s something you don’t like, be part of the solution, and not the problem. We all have unique gifts God has given us to make the world a better place. Mister Rogers, thank you for the impact you had on my life. Thank you for liking me exactly the way I am. See you in heaven.

Lord, help me to slow down and take my time so I can listen to your voice and know your will. As I write, help me to create things that are pleasing to you. Amen